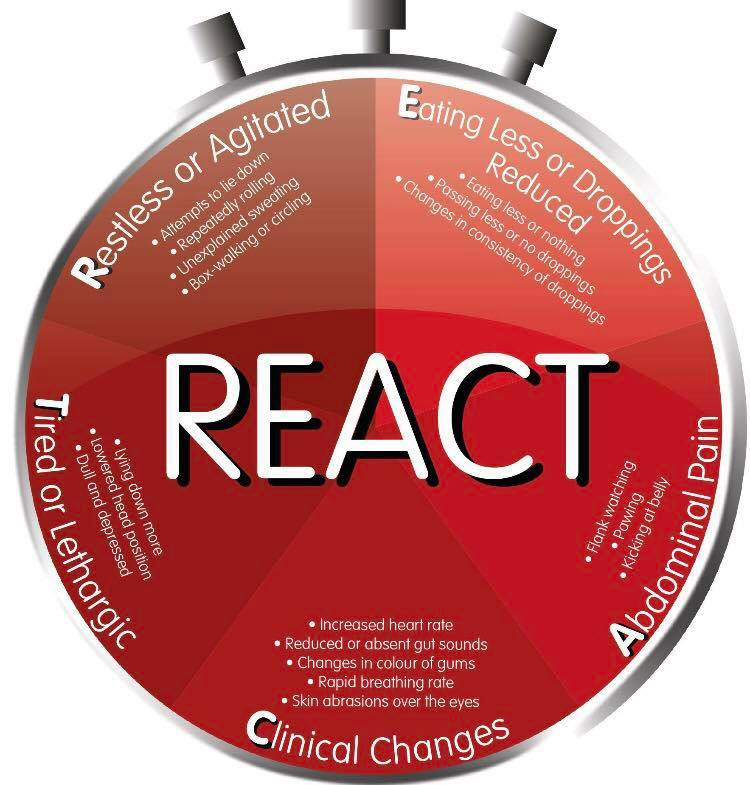 Did you know that there are certain factors which may increase the risk of colic in your horse, pony or donkey? In around 70% of colic cases, the diagnosis is either a spasmodic/gas colic, or no cause is identified. There are many risk factors which we know to be significant - check out the list below so that you are aware if your horse is at an increased risk, and see if there is anything you can do to reduce your horse’s risk of colic

Follow the link for a video of a horse showing colic signs:

Does anyone know what's wrong with this horse? X

Foals less than 6 months of age - increased risk of surgical lesions of the small colon, intussusceptions and ascarid impactions

Thoroughbreds andArabs may be at increased risk of colic, although there is debate as to how true this is - this may more likely be due to how the horse is managed, rather than a true breed disposition

Mares: uterine torsion (twist of the uterus) may result in colic signs. Also foaling, and the 60-150 days post foaling, can be associated with an increased risk of colic, the latter being due to increased space within the abdomen which may allow displacement of the intestines from their normal position

Stallions - at risk of inguinal herniation

Season - Spring and Autumn are the greatest risk periods for colic

Some areas of the UK have an increased incidence of equine grass sickness.

Areas with sandy soil are also at risk of sand colic, i.e. sand accumulation in the large intestine which may cause diarrhoea, obstruction or even torsion

Recent changes in hay/haylage type or source can increase colic risk, or changing a horse’s roughage more than once per year

Remember - make all changes of feed type or amount gradually

Stabling - stabled horses are at higher risk of colic than those turned out, however it may be easier to detect early signs of colic if your horse is stabled. Increasing time at pasture has been shown to decrease the risk of colic - there is a beneficial effect of grazing, ability to exercise and interaction with the natural environment - trickle feeding and a forage based diet are ideal - attention must be paid to stocking density, exposure to endoparasites and suitable grass/plant types on pasture

Activity levels - any horse in ridden work is theoretically at an increased risk of colic relative to horses turned out with no ridden exercise, especially if there has been a recent change in exercise intensity

Tapeworm (Anoplocephala perfoliata) is strongly associated with an increased risk of ileal impaction and spasmodic colic. We recommend testing for tapeworm with either a saliva test or blood test at least once every 12 months (or in some cases every 6 months if the individual is at high risk of picking up worms). We should alway try to test before we dose to avoid resistance to wormers, however if this is not possible worming at least yearly with a wormer which includes tapeworm cover is recommended.

Ascarids may be associated with intestinal obstruction, gastrointestinal rupture, peritonitis, intussusception or abscessation in foals

Colic can occur if there is sudden and rapid death of worms following administration of a wormer, so it is vital to prevent large worm burdens becoming established

We recommend that your horses have worm counts performed every 2 months between Spring and Autumn i.e. March to September to determine whether, and are strategical tested or dosed for tapeworm once-twice yearly depending on risk, they should also receive a dose for encysted redworm over the winter, ideally November/December

Other strategies to combine with your strategic worming programme to reduce the risk of colic associated high worm burdens include: rotation/resting of paddocks, co-grazing with ruminants (cattle or sheep, regular removal of faeces from pasture

Water deprivation - your horse should always have access to clean, fresh water, regardless of the time of year - this will reduce colic risk, particularly large colon impactions

Owner factors - horses cared for by their owners, rather than non-owners may be at decreased risk of colic or recurrence of colic. The reasons for this are likely to be complex, but it is food for thought for all of you out there with horses on livery…

If having read this blog you believe your horse or pony to be at an increased risk of colic, please be vigilant and monitor carefully for early signs of colic, and contact us if you are concerned on 07747771182.