The team at Ridings Equine Vets have rescued two young colts found abandoned on farm land near the practice. The 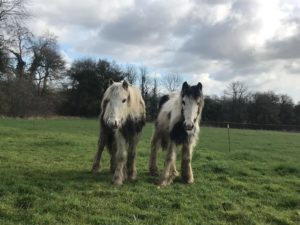 colts are estimated to be between 6 - 9 months old and had found their way on to some grazing land after being left in a farmers field. Unfortunately their companion, a third colt had already died when the team rescued them.

Unable to find any assistance to re home the colts the team at Ridings decided to take them on and try to re-home them. Catching them was only the beginning of their journey and they were then walked (probably wearing head collars for the first time) to the practice about one mile away. 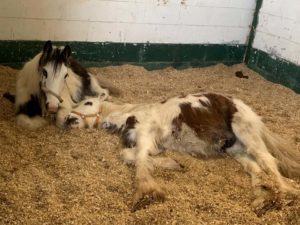 The little boys were kept in strict bio-security measures and tested for infectious diseases, they were crawling in lice and were in a very poor body condition both suffering from severe parasites and respiratory infections. Once all their ailments were treated they were then castrated as the team felt that it would be much easier to find homes for them as geldings than colts.

Within only a few weeks the little boys had begun to feel much better, put on weight and were becoming very friendly. Once they have had their second vaccinations and their passports have arrived they will be ready to move on to their new home.

The team at Ridings feel the whole experience has been extremely rewarding and hope to stay in touch with the boys for years to come as everyone has become very fond of them.